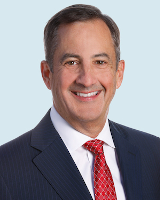 John is a founding partner of Carr & Ferrell LLP, one of Silicon Valley’s foremost technology and litigation law firms, and specializes in patent litigation and intellectual property matters. He is Chair of the Firm’s Intellectual Property Practice Group.

Distinguished by his demonstrated technical and legal expertise, John has been noted in the Silicon Valley Business Journal list of Who’s Who in Silicon Valley and Northern California’s Super Lawyers. He was also listed by the Los Angeles Daily Journal as one of California’s top Rainmakers, by San Jose Magazine as one of Silicon Valley’s top Legal Eagles, and by San Francisco Magazine as one of Northern California’s top lawyers. Additionally, under his leadership, the firm was recently recognized by Corporate Counsel Magazine as a Go to Law Firm for Intellectual Property. John has received an AV® Peer Review Rating from Martindale-Hubbell® (a representation of the highest level of professional excellence). Over the past decade, John has presented on and spoken about patent and intellectual property issues, both legal and technology business forums around the globe.

In addition to practicing law, John is an active technology investor and member of The Band of Angels, Silicon Valley’s oldest seed fund organization.

Carr & Ferrell is a full-service law firm dedicated to helping you grow ideas into world class enterprises. We protect our clients’ rights through our corporate and venture capital practice, strategic patent and intellectual property services and a robust litigation practice. Based in the heart of Silicon Valley’s technology and venture capital community, and keeping close to commercial and technology markets, our attorneys leverage their technical, business and legal expertise to help emerging companies and investors succeed through the entire life cycle of an enterprise.