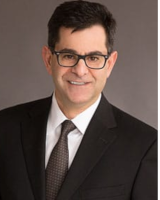 As a founder and shareholder of Dobrusin Law Firm PC, with more than twenty-five years of experience, Eric concentrates his practice in patent counseling and strategic patent prosecution, with particular emphasis in the fields of materials science (including plastics, ceramics, metals and electronic materials), biomedical technologies, and automotive technologies. Eric has been active through the years in alternative dispute resolution (ADR) for intellectual property disputes. He previously served as Executive Director of the National Patent Board, an ADR organization having Rules that he helped to draft. He also has been appointed and served in United States District Court patent litigation as a Special Master, and as an independent neutral for multiple alternative dispute resolution proceedings. He is on the list of Mediators for the World Intellectual Property Organization.

Mr. Dobrusin was honored in 2013 by the Michigan Lawyers WeeklyTM , as among its “Leaders in the Law,”Mr. Dobrusin also has been honored by Best Lawyers® as 2014 Lawyer of the Year for patent law in Detroit.

At The Dobrusin Law Firm, our experienced Intellectual Property lawyers assist clients in maintaining and protecting company assets through detailed, strategic counsel. Based in Michigan, our boutique Firm represents market leaders around the globe, including Fortune 500™ and emerging innovative companies, which seek to accelerate business value through technology.

Concentrating in Intellectual Property law, with particular focus on materials, chemical and mechanical patents, trademarks, and copyright matters, our attorneys are also experienced in international and technology laws associated with protecting your Intellectual Property portfolio. We regularly counsel clients on matters such as confidentiality, employment agreements, and noncompetition issues.