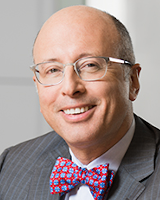 David Bernstein chairs Debevoise’s Intellectual Property Litigation Group. He is widely recognized as one of the nation’s leading intellectual property litigators. Mr. Bernstein is ranked in the top tier by Chambers USA, which notes that he is “a luminary in the field and provides high-level strategic thought.” Chambers has also reported that he “is roundly considered to be one of the finest trademark litigators in the nation” and that his knowledge of the law is “best-in-class.” Mr. Bernstein is highly regarded for his “encyclopedic knowledge of trademark law as well as the understanding of strategy needed to win big cases.” Clients note he is “excellent on his feet,” “an exceptional, dynamic lawyer and a tenacious litigator” who is “just incredible in terms of strategic planning,” and “a great thinker, strategist, business adviser, and, when necessary, the best litigator out there, bar none.” Mr. Bernstein is recognized by The Legal 500 US, where he is seen as “a brilliant litigator,” and “the dean” of the IP litigation bar, and is ranked in the top tier in the World Trademark Review 1000, where sources note that he is the “one you turn to when you have a fight you cannot lose” and is undoubtedly one of if not the best trademark lawyer in the country.” The praise he receives from his peers is equally emphatic: “Going up against him is quite an eye-opening experience. He exudes authority and really does live up to his reputation as an all-star litigator.” Managing Intellectual Property magazine has selected Mr. Bernstein as the Outstanding IP Litigator of the Year, The International Trademark Association has awarded Mr. Bernstein the President’s Award, and the International Who’s Who of Trademark Lawyers has selected Mr. Bernstein as one of the top ten trademark lawyers in the world.

Mr. Bernstein is an adjunct professor at New York University School of Law and George Washington University Law School, where he teaches Advanced Trademark Law, and at the University of California at Berkeley where he teaches Trademark Practice. He has authored or co-authored numerous articles and chapters on intellectual property, as well as the leading treatise on advertising law, The Law of Advertising, Marketing and Promotion.

Mr. Bernstein is Past Counsel to INTA, has served on the Board of Directors, co-chaired the Annual Meeting, and chaired the International Amicus, Programs and Emerging Issues Committees.

The Debevoise Intellectual Property Group is recognized by clients and adversaries alike as one of the strongest practices of its kind.

Consistently placed in the top-tier by Chambers Global, the Intellectual Property Group enjoys a position of extraordinary prominence, including being selected as Managing Intellectual Property’s “Trademark Contentious Firm of the Year” in four of the last seven years.

The Group handles a wide variety of cases around the world, including trademark, trade dress and advertising disputes; copyright matters in media and entertainment; right of publicity issues; and unfair competition, trade secret and patent cases. Many of its cases have cross-border components, and it has deep experience across a wide range of industries.

With litigators renowned for their tough-mindedness and practicality, the Group led The Legal 500 to say, “You wouldn’t want to spill any blood in the water with these guys around. They are tough, efficient and highly effective trial lawyers.”

Known for its cutting-edge work, the Group excels at solving unprecedented legal challenges. Examples include its work on behalf of the major TV networks in ABC et al. v. Aereo, in which the U.S. Supreme Court held that Aereo violates their copyrights when it transmits over-the-air broadcast programs through the Internet to its subscribers without authorization from the copyright owners. Other groundbreaking results include the innovative settlement it crafted between the NFL and a group of retired players over the use of their names and likenesses in NFL Films programming, and its win on behalf of Yves Saint Laurent in the high-profile “red-shoe” litigation against Christian Louboutin.

Partners on the team are also thought leaders in the field, active in teaching and writing books and articles, including “Copyright Law: A Practitioner’s Guide” and “The Law of Advertising, Marketing and Promotion.”

Clients benefit from lean, highly experienced and skilled teams that offer thorough analysis of the law, refined to its most practical application. Finding the right business answer is always the priority.

Partners work closely with clients at every step of a matter. Within Debevoise, the Group enjoys a close working relationship with complementary practices and other offices. The result is what Chambers USA has called a “sophisticated, high-value, and well-balanced practice,” with “terrific people and great depth.”