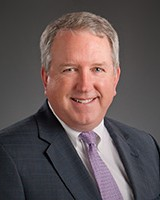 Jim’s practice focuses on the enforcement and defense of intellectual property infringement and related claims in federal and state courts and in arbitration. He has been actively involved in a large number of patent infringement lawsuits, encompassing diverse technologies such as feed-through filter for implantable medical devices; methods for archiving and viewing sporting events over the Internet; natural language processing for queries to computer systems; compression-style coaxial cable connectors, electro-surgery blades and coagulation probes, and macroporous media for high performance liquid chromatography columns. Jim has also litigated federal trademark, unfair competition and antitrust claims and represented plaintiffs in copyright infringement actions on behalf of construction professionals, software publishers and performing rights organizations.

Before joining Harris Beach, Jim was a named partner of a Syracuse law firm. He has served as a Navy Judge Advocate and a Navy Pilot.

Since our founding in 1856, Harris Beach has grown to be among the country’s top law firms, as ranked by The National Law Journal.

From the earliest years, we have been on the cutting edge of the law. At the turn of the 20th century, we helped guide the expansion of the railway system throughout New York state. We were there to help one of our clients secure the patent for a novel photo-imaging system that many thought would never catch on, but became an international leader in photocopying systems. Before the rest of the country focused on health care reform, we were helping our clients design a community system that resulted in costs dramatically below the national average.

Our law firm remains at the forefront of issues facing businesses in the 21st century, whether it’s competing in the global marketplace, protecting innovations, helping organizations manage cyberattacks or meeting the demands of complying with the Affordable Care Act. Above all, we understand and match our clients’ needs to move faster, think more creatively and develop new business models to achieve sustainable growth.